Quanderas and I competed in the Greek National Championship 2019 that took place in the Olympic Equestrian Center in Markopoulo on 24-26/May.

It is an incredible honor to be able to defend my title and win the Greek Championship for the second year in a row and for the 5th time in my career as a Senior.

I owe this to my amazing horse and partner – Quanderas – who gives his heart and soul into our performances.

Moreover, I would like to thank my trainer Joanna Georgopoulou, who has been there for me through thick and thin, as well as the entire team of IOB Riding Club for their constant help and support.

Special thanks go to Lisa White for all her help and advice during her clinics as well as throughout the year.

Finally, to my family and friends – I could never have done this without you, you are my rock!

In addition to the championship categories, I also competed with Sansoucie. I was very pleased to be placed 2nd in the Prix St. George and 1st in the Preliminary Prix St. George.

The plans for the summer include the CDI Tsaratsovo in Bulgaria (6-9/June) where I will be making my international debut with Sansoucie and will also compete with Quanderas.

The culmination of the summer season will be with the Balkan Championship 2019 which will take place in Lipica, Slovenia in July. 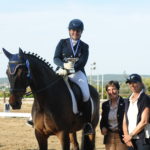 At the Prize Giving Ceremony with International Judge, Mrs Nicoleta Milanese and my trainer Joanna Georgopoulou 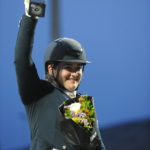 During the Official Championship Ceremony 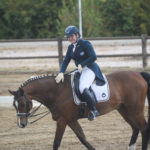