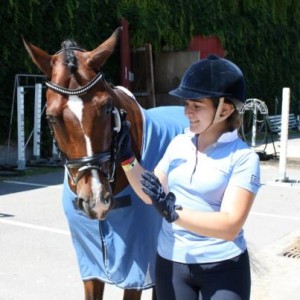 Ever since I remember myself I always asked my parents to have a pony in our back yard. My first contact with horses was when I was five years old in a riding club in Volos (Northern Greece) were me and my family spent the following year due to my Father’s work obligations. After that year I returned to Athens and stopped riding until the age of twelve when I once again started. I have never stopped since then.

My first real break in the dressage world was when I got Dynastie in 2007, my lovely black mare who taught me so much. We competed together very successfully for four years at international and national level. Even though she passed away in 2015, she will always have a permanent place in my heart and thoughts.

Later, in 2011, after one year in the Young Rider’s Category, I decided to take a gap year from university and travel to Germany in order to train and compete. That was when I found Quanderas (Quando Quando x Paradis Vogel)- My dancing Partner as I like to call him.

Spending the next two years in Germany, training at the Kasselmann Stables with Heike Hammel was an incredible experience. After many successes at German national competitions and International shows though, I decided to move back to Greece to complete my studies at DEREE College.

Since then I have been based in Athens with Quanderas, Sansoucie and Tespichore while I have been travelling abroad for competitions and championships.

Being based so far geographically from the international dressage scene is difficult but it also means that I am able to pursue my career as a shipbroker and to raise awareness about the magical world of equestrianism and its benefits on people with learning differences, in my home country.

Making the choice not to become a professional rider was difficult since dressage has been my life’s passion. However, by not being a professional it means that I will be able to place my love for horses above all else (even above successes sometimes) a choice that is not easily made when one is a professional.

Having a full time job while still competing three horses full time is very tough but extremely rewarding! In an attempt to share my experiences and thoughts on horses and competing, I created a blog on which I would love to hear your thoughts on!

Feel free to contact me for more information on what you’ve read, to ask a question or simply to say hello!